‘The Feast of St Michael the Archangel falls on the 29 th of September, which is the Pattern Day in Lixnaw. It was on this day in the year 1938 that Molly O Brien, our local tinker, found me under a head of cabbage, or so I was told! I was baptised Margaret Mary, youngest daughter of John and Catherine Horgan.’
These are the opening lines of Peig Horgan’s beautifully written memoir of growing up in
Lixnaw, County Kerry in the 1940s and 50s. In this unique and eminently fascinating account,
Peig has woven a magical carpet of love, honesty, faith and mischief. An absolute joy to read!

Priscilla Donovan is a raconteur by nature as well as being an accomplished stage performer.These gifts are  the bedrocks on which this entertaining collection of short stories are built. They provide the drive, the natural flow of the language, the synchronisation of pace and plot and the vibrancy of tone that make this a remarkable first collection.

Priscilla Donovan’s stories will stir your senses. They will take you from Pavarotti to Piaf, from Manhattan’s Upper West Side to the southwest of Ireland, from sweet potato pies to cream buns and from this life to the next, and prepare yourself for a few twinges of conscience along the way.                Neil Brosnan

In Simple Gifts, Priscilla shares with us moments of tenderness, intrigue and beauty. These stories, poured from heart onto page, present a totally unique perspective of a very bright and dark world.         Annemarie Ní Churreáin​, Kerry Writer in Residence 2018-19

Delve through Barbara Derbyshire’s Leaving Echoes and you will step onto an emotional roller-coaster that will astound, astonish and amaze you, whirl you around and blow your mind wide open! In turn intriguing, imaginative, soothing, spooky, romantic, amusing, nostalgic, perplexing, bleak, horrifying, loving and light, and that’s just the author herself! Her wonderful poems and stories are all of the above and much more besides.

Glimpses of an idyllic childhood growing up in London are expertly interwoven with heart-warming accounts of love and loss, laughter and longing. Barbara allows herself to lay bare her soft and cuddly side but doesn’t try to hide her dark side either. (You may want to skip-read ‘The Last Supper of Three Serial Killers’ with your eyes half closed if you’re of sensitive disposition – You have been warned!)

Elsewhere she trawls her fertile imagination to take us to magical parallel worlds, worlds that blur the lines between fact and fantasy and even between life and death.

I urge you to join Barbara on her incredible journey. The characters you meet along the way in Leaving Echoes will stay with you long after you finish reading this remarkable collection.

dare I be gentle

Welcome to this remarkable first collection, dare I be gentle, from Susan Hitching, an artist/poet whose writing skills have been honed and nurtured by the fertile literary environment of North Kerry. 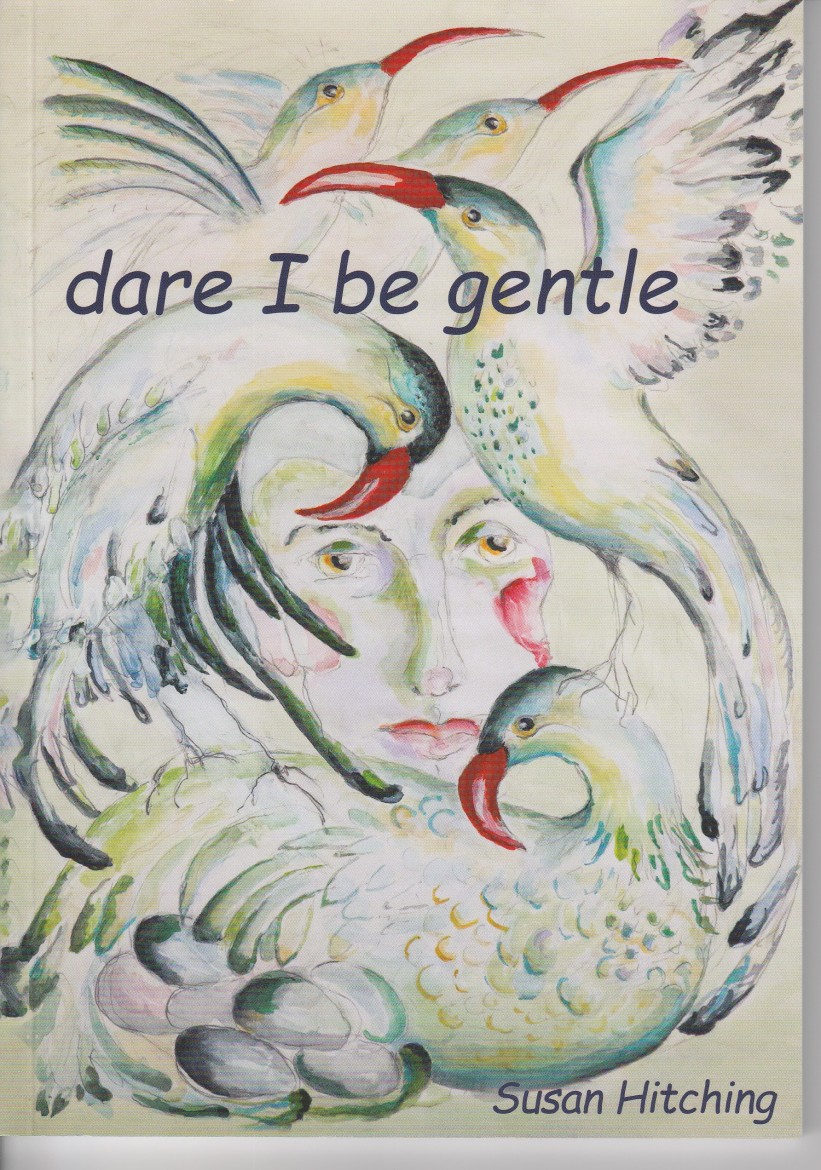 Susan writes in her biography of seeking to paint pictures with words and to write poems with paint. Her art certainly speaks as we can see from the beautiful cover, and in dare I be gentle she paints lonely landscapes, silent snowfalls and sweeping shorelines with equal and consummate ease.

Her lines are filled with movement, the dance of rhythmic sounds/flowing silkily down. She describes Five Bras as soaring like gulls/gliding white, wheeling on the current. Everywhere her artist’s eagle eye is evident in her imagery: an ebbing tide skirting stretch-marks of sand, and in brush-strokes carried in streakings of rain on the windows of a rushing train, or rivering/sunlight caught in the eye of a fish.

In her shorter poems, she eschews conventional punctuation in favour of visual effect. Every word and space have a role to play in conveying the poet’s thoughts, and language is stripped to its essence. The results are like polished diamonds.

This is a unique and exhilarating volume that will leave you breathless. dare I be gentle is like nothing else you will read this year. I am honoured to have played a part in bringing it together and heartily recommend it to you.

This is deeply felt poetry, intense and personal. But it is not poetry that depends on the reader being aware of the circumstances that gave rise to it. Rather, it allows the intensity of the poet’s experience, and her contemplation of that experience, to shine through the words sensitively and skilfully patterned on the page. This is the proper business of poetry, and Susan Hitching is a true poet. As she says herself, in lines that aspiring poets would do well to contemplate:        I want to live/ in the quiet of an inbreath/ between lines/ where commas and dots silently/ punctuately/ stop everything.

Susan Hitching’s poems display a startling lyrical acuity. Her vision is attuned to the fine detail of the world which enriches her poems with clear, precise and truly surprising imagery. The poems enter their subjects through language-play and movement. Her instinct for word choice coupled with her awareness of the latent power of white space make for poems that are powerful and active: everything is in flux; on the move. At work here is a visual language that resonates beyond words themselves. A language that reverberates as an after-echo in the memory of the reader and marks Hitching’s distinctiveness as a poet. Read this book and experience first-hand what sorcery lies between finger and key.

Brendan O’Shea was born in Kilmorna, outside of Listowel in County Kerry. He attended Islandanny National School where he was encouraged to write by his inspirational teacher, Paddy Kennelly from Ballylongford. On to St. Ita’s Secondary School in Abbeyfeale then and to Rockwell Catering School in 1973, where he qualified as a chef.

Brendan describes himself now as ‘…a travelling sales representative, a lover of genealogy and a collector of inspiration from the ordinary folk on the highways and by-ways of Ireland.’ Ghosts, his first collection (and hopefully not his last), is crammed to the brim with the fruit of that inspiration.

Brendan takes us with him on his travels, from the deserts of the Middle East to the drystone walls of Galway, and to the next world as in Talking to the Dead! Elsewhere we are reassured by the age-old Kerry promise that whatever happens, Yerra, You’ll be all right!’ There is humour too in the role of the humble Walking Stick and the Weapon that lurks in the bathroom!

Love of nature and humanity is beautifully portrayed in these poems and stories. Warmth and empathy emanate from every page. We meet the wise and gentle Tom Crowe from Woodcock Hill –

…no need to shout / for Tom will get the teapot out

and talk of land and country life, / no worries about pain or strife

And the great stonemason Billy Foley of Newcastle West, who believes that if you’re going to lay a stone, then you lay it right or not at all!

We find a familiar metaphor in Shadows, the opening poem, when the poet meets The Black Dog of depression in his friend –

…a stranger from within / brought darkness to (her) days…

…it took the light / and in its place / left shadows.

Ghosts explores themes that are at once both simple and profound. In Listening we are invited to heed what nature is telling us –

There is righteous anger at the injustices wrought by The Magdalen Laundries, but belief too that the world can learn from its mistakes. ‘I’m growing old,’ says the poet, ‘in a world that is wiser, I hope.’

Brendan describes his writing as ‘A Countryman’s idea of Poetry’ but this is the Poetry of Everyman. Brendan O’Shea speaks for the down-trodden, the forgotten, the troubled and the aging. He invites us to recognise the inter-connectedness between parallel worlds – Man and Nature, Past and Present, this world and the next, the Middle East and the West of Ireland – as he moves easily between them, breathing life into his Ghosts.

You can order your e-book or paperback copy of Ghosts from brendanoshea.net 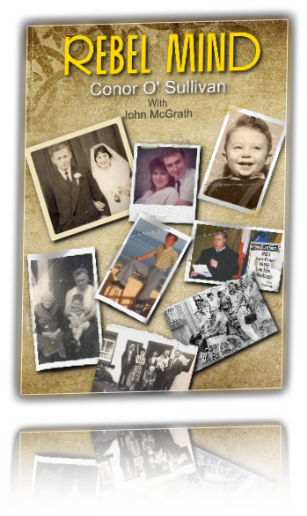 Born in Slough of Clare and Kerry parents, Conor O’Sullivan was diagnosed with cancer of the spine at the age of eighteen. Misdiagnosis and medical negligence left him confined to a wheelchair and condemned to an early death. He was admitted to a hospice and told he had only months to live, but Conor refused to die. Supported by a loving family and fuelled by Irish rebel songs and stories, he drew his inspiration from the heroes of Irish history and from the Republican struggle for independence ongoing in Ireland at the time. Conor’s battle with the cancer cells became synonymous in his mind with the struggle for Irish freedom, a cause he still believes in passionately. He survived both the hospice and morphine addiction to become an activist, first for Disabled Rights and later for Republicanism. The story of his journey is one of love, courage and despair, laced with Conor’s black humour and his obstinacy in refusing to accept the limitations of his disability. 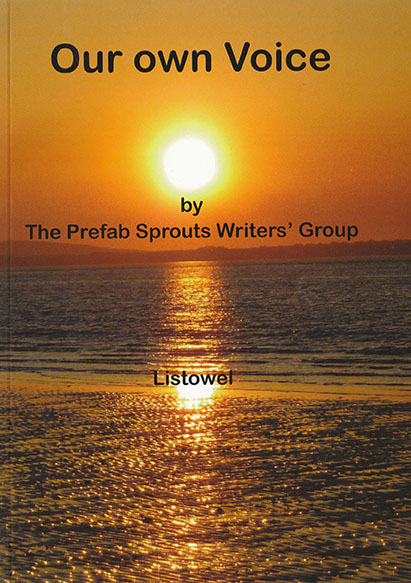 The Prefab Sprouts Writers’ Group were so called because they spent much of 2010
creating their literary masterpiece in a prefabricated classroom in Listowel Community
College, County Kerry. Our Own Voice is a fine and varied collection from this dedicated
bunch of FETAC Creative Writing Students.

Striking a Chord is the response of over 40 North Kerry Writers to an invitation to put their talents to work to raise funds for a very worthy cause, that of Áras Mhuire Nursing Home in Listowel, County Kerry.

This sparkling collection is available from:
moybellapress@gmail.com €10 plus postage
€2.50 (Ireland) Rest of the world – €5

Listowel Just Write Group began life in a prefabricated cabin in the grounds of Listowel Convent, hence the title of their first collection, The Cabineers. 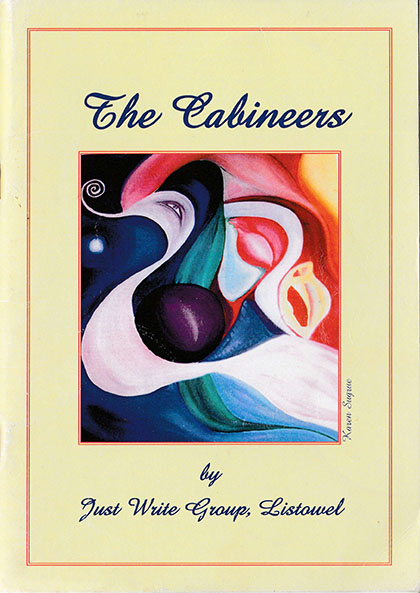 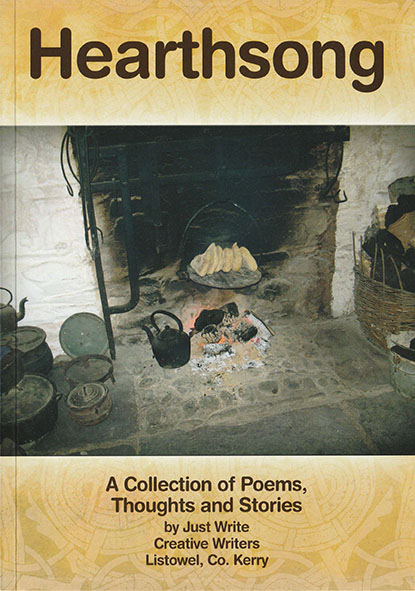 This was followed by Bridge of Words in 2006 and Hearthsong in 2009, stories, poetry and memoir that will tug at your heartstrings and split your sides laughing in the same breath.

Just Write Creative Writers are still going strong with many of their original members still creating beautiful stories and poetry.

The Nine Daughters Creative Writing Group are nine women writers from Ballybunion Active Retirement, so called because they produced their first collection, Lifelines, in 2009 within a stone’s throw of that famous North Kerry landmark, The Nine Daughters’ Hole.

In the interests of gender balance, they were joined by Bill in 2014 for their second publication, A Little Life Music. Writing and art of the highest quality are showcased in this wonderful volume as these talented writers and artists capture in words and pictures, their experience of lives lived and celebrated without compromise or apology.

Tapestry of Love, Life and Spirit by Barbara Derbyshire

Humour, compassion, poignancy and quiet defiance… Barbara speaks with a unique voice
and from a strong feminist perspective. Her writing is gentle and personal, light and subtle,
confident and confiding.

The hottest collection you’ll read this year! Marian’s writing s fuelled by a fierce and burning passion, for life, for love and for her native Kerry. Don’t say you haven’t been warned.

From the Back Window

“This collection of short stories and poetry is testament to the possibilities of living,

writing and loving. The Noddin’ Dogs explore and reflect upon the wealth of human experience to deliver a collection that both excites and challenges.”

“Every now and then are there little gems in life, this is one of them…” 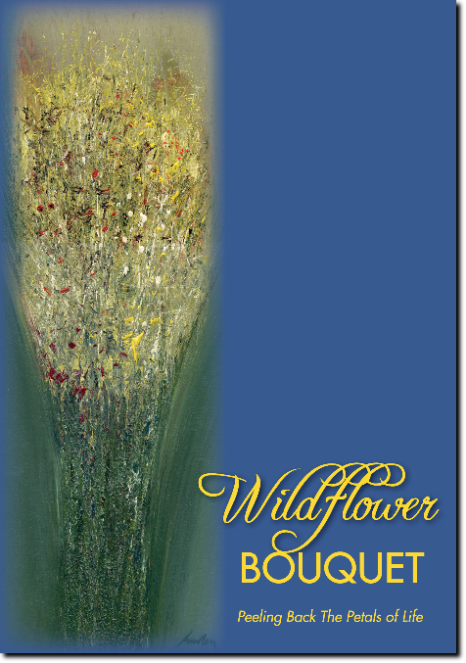