Out beyond my window, sunlight vies with

shadow as the brush of Spring sweeps down

from Cnoc an Óir, greening all before it.

From the woods, where even now the buds

of oak and sycamore defy the icy breeze.

and a butter-dish of daffodils

The dog sleeps in a warm sunbeam

My eyes scan the sky, searching for swallows.

Covid Sonnet, May 2020
The world has pinned us with a warning glance,
the kind our mothers gave us long ago,
the look that was designed to let us know
that this might be our last and final chance.
So grounded, we can only hope and pray
as, day by day, we inch away from fear
and tiptoe towards a future far from clear
our wounded planet showing us the way,
that voices raised in ignorance and greed
may yet be drowned by kindnesses and care.
Together we can rise above despair,
united we will find the strength we need
as, all for one, we reach beyond the pain
and dare to dream tomorrow once again.

In Ballyegan Bog the cuckoo’s tune

has changed to mark the turning of the year.
Through summer’s haze the lark sings loud and clear
and soars above the dancing ceannabhán.
Where lines of neat turf-tepees strut and seem
to mock neglected neighbours with disdain,
sad strips of black spaghetti wait in vain
for willing hands. The bog-land trampoline
beneath my feet springs back as I march on,
remembering those summer days long gone
when life was sweet as heather-scented air
and feet were bare and fleet as childrens’ are,
when time endured and even work was play
and skylarks sang the live-long, lark-song day.

Dan Foley dug his field but not for gold,

Though long ago his father showed him how.

‘Plant trees,’ he said, ‘The ground’s too poor to plough,’

But sons don’t always do as they are told.

And so Dan dug where mighty trees had grown,

Where cows had grazed and summer crops were sown

And men had thrived two thousand years before.

Dan raised them one by one from acid ground,

And as he filled their void with fertile soil,

He knew the field would soon repay his toil;

For land is like a poem, it draws men back

To write another line and leave their track.

The week after St Patrick’s

The week after St Patrick’s, my mother
pressed his suit and packed his case,
Then drove him to the station for the early train
from Ballyhaunis to the crowded boat,
Then on to Manchester and solitude
until All Souls came slowly round again.
I don’t remember ever saying Goodbye.

At seventeen I took the train myself
and saw first-hand my father’s box-room life,
the Woodbines by his shabby single bed.
I don’t remember ever saying Hello
Just sat beside this stranger in the gloom
and talked of home and life, and all the while
I wanted to be gone, get on with mine.

Westerns and ‘The Western’ kept him sane,
newspapers from home until the time
to take the train came round once more.
Lost in Louis L’Amour, he seldom heard
the toilet’s ugly flush, the gurgling bath
next door. Zane Grey dulled the traffic’s
angry roar outside his grimy window.

Back home the year before he died we spoke
at last as equals, smoked our cigarettes,
his a Woodbine still, and mine a tipped;
My mother would have killed us if she’d known.
The phone-call came as Winter turned to Spring
I stood beside him, touched his face of ice
And knew our last Hello had been Goodbye.

Men have walked this canyon for ten thousand years,

following herds and seasons, drinking from its streams,
taking what they needed before moving on.
Then came the Pueblo people, seeking shelter.
The canyon welcomed them, appeased their spirits.
And so they set aside their wandering
and grew to love this ancient land.
Here they carved their homes from friendly rock,
built their waffled rooms from mud and tuff,
gleaned the canyon’s secrets from its whispering water
that knew the rains would come. And when they saw
the dark clouds threaten from the canyon’s rim,
when thunder rumbled on the mesa tops,
they gathered up their children, clambered to their lofty lairs,
pulled their ladders clear of tumbling waves
and gazed in silent awe as forests hurtled by.
Four hundred years they flourished,
painted and carved, hunted and prayed,
sang their old songs, told old stories,
watched their children grow, and then one day
they simply walked away.

Fresh Trout, Home-made Ice-Cream.’
Beneath a darkening Colorado sky
Swollen with promise, we sought shelter
From rain that never came.
The Sugarplum Lady trailed an oxygen tube.
Her youthful face belied her aging frame.
Far to the north the forests blazed
And she could smell them. (Until she mentioned it
We hadn’t sensed the sting of smoke
Around our eyes.) “From Ireland!
My great-grandfather was Irish too.”
A kindred spirit then. “He was an Orangeman.”
She swelled with pride. “He wore the scarf, you know!
My grandmother said we were Scots-Irish –
From Aberdeen, as I recall – not Scots at all.”
No use telling her that Aberdeen…
She waved the facts away; what did we know?
More Orange than she realised
The Sugarplum Lady served us Peach Ice-cream
And threw a home-made cookie in for free.

Fibonacci in the Thirteenth Century 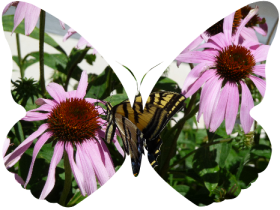 discovered mathematically precise
progressions and went on to theorise
that zero, one and one and two and three
would show how rabbits breeding in a field
might multiply. Seven centuries went by,
then Turing in his garden one day spied
these self-same forms in sunflowers so revealed.
Such beauty and precision can be found
in ferns and fir-cones, flowers and all around
on land and sea – a golden ratio.
And yet for all this symmetry, we know
that sometimes flowers like men refuse to fit
our expectations, and are finer for it.